I had always known that I wanted J to announce if we had a son or a daughter at delivery. I wanted the anticipation and mystery for the entire pregnancy.

We went into the 20 weeks scan much more prepared and much more accepting of the fact we were going to become parents. J had been feeling movements as had I. My bump was growing every day and I was feeling well and excited.

This scan was not without incident however as we arrived at the hospital to be told we had missed our appointment. Turned out they had written the wrong date on my notes. A slight foot stamp saw us put on the list for that morning.

The sonographer started our scan with the announcement that if Pip was not compliant we would have to come back another day as they couldn't wait for sugar or walks to get baby moving.

Luckily, and as turns out, pretty uncharacteristically Pip was on tip top form and laying perfectly for the scan.

This is an important scan, an anomaly scan where careful checks are made into babies heart, kidneys, bladder, brain and spine. At this stage in the pregnancy all the vital organs in baby are formed and baby is plumping up and maturing their lungs for arrival.

This is also the scan at which gender can be seen if baby is laying in the correct position. Turns out Pip was happy to share while I looked away. J had been cribbing online and the sonographer had been told not to inform us. J predicted girl, I said boy, and the sonographer rather unhelpfully said that she knew! 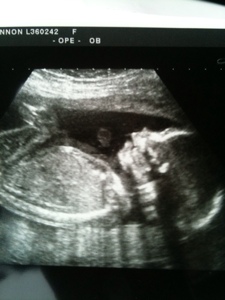 We left with another picture of L and a continual guessing game on Pips gender. 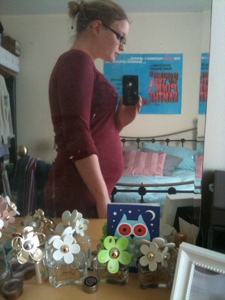