L was hostess for a recent NCT playtime and I took the opportunity to be a bit creative with a Playspace for L and her baby chums.

I wanted something with lights as it is Christmas and something snow like as we probably won't be having a white Christmas. I didn't want to spend money (SMP is pretty miniscule) and had an afternoon and evening to do it in.

I had seen a light tunnel on the home of good ideas and way to waste hours which is Pinterest but was lacking a cardboard box big enough (ironically one arrived the day before the party but it still contained our new boiler) so improvised by using our airer. It is high enough to keep the lights out of pesky mouths and also had the ability to use pegs to attach the lights from.

I had two large Aden and Anais muslin swaddles (love these so very much, completely indulgent but so very worth it for their continued fabulous uses). They are white and starry which suited my theme quiet well. They were easily pegged over the airer as well as being long enough to pull together at one end to enclose the tunnel. Brilliant. 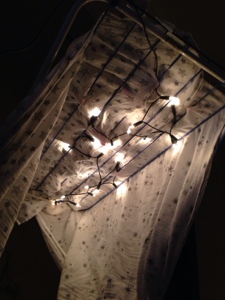 It looked very pretty but I wanted to extend the snow theme so having seen how to make pom poms relatively quickly using a fork, again on the wonderful Pinterest, I decided to spend an hour making Pom pom snow balls to hang. Super easy and step by step instructions can be found here. 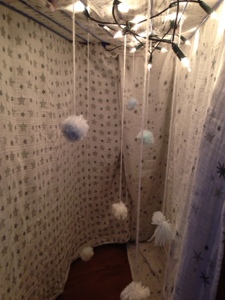 Tada!! A finished snow sensory tunnel. During our play date we blew bubbles into the space and a baby lay back and enjoyed the lights and batting the snow flakes. You could extend it and as a sense by having a suitably snow themed musical compliment or white fluffy fabric underneath. You could hang tinsel or other twinkly decorations from the airer also. In fact this is the simplest it could be ... I might go back and embellish it some more!

This is definitely a supervised play activity as the structure would not withhold repeated tugging but it worked well enough for the purpose.

Happy snowy playtime! If you get inspired I would love to see pictures, tweet them to me @mummymorkus