Up and Down with the Ga Ga Theatre Company 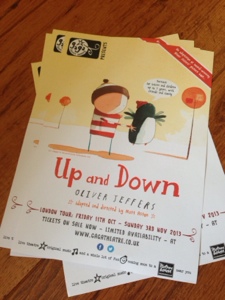 I grew up enjoying the theatre. I have very fond memories of going to see panto when young, around my November birthday. I had a surprise trip to see Jason Donovan as Joseph in his Amazing Technicolour Dream Coat for my birthday and can still vividly remember sitting in the auditorium in awe.

I have been up on stage and my strongest school memories are based around the assembly's and school plays I was part of. I also spent summers at theatre summer schools. I studied Drama at A level and then at university as well as taking part in theatre company trips to Edinburgh festival and performing there.

I have even once been a paid actress on stage!

Needless to say I wanted theatre to be part of L's childhood and for her to grow up understanding the conventions of these events and knowing the rules of sitting and watching a story unfold in front of you. Nothing really compares to the shared experience of theatre.

I saw Ga Ga Theatre Company promoting their current tour of Picturehouse Cinemas in London on twitter and asked if they were coming to my local venue. Not only was the answer yes but they very kindly offered me complimentary tickets for us both for L's first theatre trip. I was very excited. 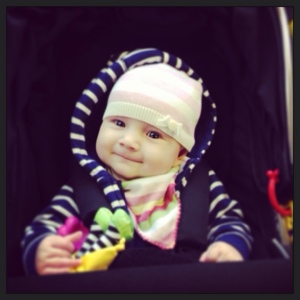 We took two buses down to the cinema and got in just before the rain got heavy. The foyer was very busy with excited children, parents and school groups. But we were quickly in the screen and seated. There were lots of booster seats available for the smaller bottoms which was handy as the seating is traditional cinema style and the stage is not elevated. 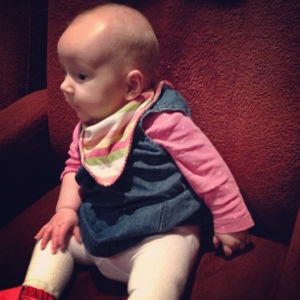 The show Up and Down is based on Oliver Jeffers book of the same title. This book sees the Boy and Penguin return as Penguin dreams of going up! As a huge fan of the books and Jeffers illustrations it was lovely to see them projected onto the cinema screen and animated while we waited for the show to start.

The story telling is done very simply. Using props, the original music score and limited dialogue the emphasise is on the visual. The beautiful projected illustrations are used throughout the show as backgrounds and as an additional medium of story telling. The original music is really well suited to the story and is very fun. I helped L bop about with Penguin and Boy a number of times.

The actors brilliantly brought Boy and Penguin alive with very physical performances from both. This is well suited to children's theatre. The lighting is very simple but really helps the children and babies focus their attention to where the action is happening.

L was captivated by the show and happily watched for 30 minutes before needing changing and wanting a feed. Having been to this Picturehouse before I knew I could change L next to my seat and did this as well as feeding L so that I could see the climax of the show as Penguin goes to drastic measures to get up!

I was really impressed with this show. It is a wonderful adaptation of a brilliant book and it is really thoughtfully done. It is very obviously aimed at young children with simplicity a key theme which matches the Jeffers books. But as an adult I was also very happy to watch. There is humour and a heart warming story of friendship in this adaptation. There is also a surprise audience participation which won't have any one squirming but will make for some excited youngsters.

*I received free tickets for both myself and L for the purpose of this review but all opinions expressed are my own.
Posted by Unknown at 21:41