Reflections on a birth 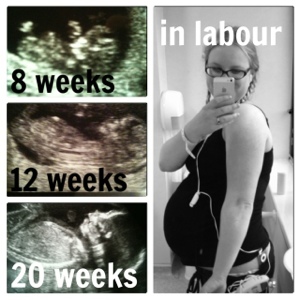 L is 3 months old and this mark of a quarter of a way through her first year has prompted me to look back on our labour and her birth.


We didn't have a birth plan, but even our very lose plan flew out of the window when we actually got down to labouring.

The day after my due date I thought I had wet myself in the night. Turned out it was my forewaters. I was put on a strict timeline and given 24 hours to go into labour. Que lots of walking, up and down stairs sideways, ball bouncing and reflexology.
The contractions were on and off all day and we settled down for an early night after I carb loaded. By midnight I was timing contractions and asked J to put on the tens machine. I carried on bouncing. By 4.30 the contractions were 3 minutes apart and lasting more than a minute. They were also bloody painful. The hospital said to come in.

Upon arriving I was examined and was only 2cm dilated. I was despondent but admitted because my time was nearly up. We made a plan to carry on until my deadline and then hormone drip and epidural would be administered.

8am and someone who didn't know our plan came and examined me. Not only was I still just 2cm dilated but L had turned back to back. She then said, while I was puffing on gas and she was still examining me "Partner please can you pass me the hook on the table over there". Before I had a chance to close my legs in protest my waters were artificially broken. And there was a lot of muconium.

Cue mild panic from both me and J as we were put on constant monitoring. Luckily L seemed completely unaware of her early bowel movement and while still in an awkward position didn't cause us any concern with her heart rate.

However, the artificial rupture of membranes caused my already painful contractions to suddenly up a notch and come thick and fast. I had more gas and air, it made me hallucinate and experience everything twice! It got unbearable. I needed an epidural.
But.
They couldn't get it in. Contractions too close together, back too tight to get needle safely in. 3 failed attempts and I was given pethadine.
I can't remember all the failed epidural attempts. I can't remember the pethadine decision being made. I can't remember anything from about 10am to 5pm.
I came to after the pethadine, after a spinal block and once the epidural was in. I had a mobile epidural so I could top it up as I wanted. So I did, a lot!
While I couldn't remember anything my body had been working and I was 9cm by 8pm, unfortunately by 10pm I was still only 9cm and a scan showed L to be trying to arrive face first rather than with a nicely tucked in chin.
I had to choose a hormone drip to make contractions strong enough to possibly deliver her or a c-section to definately deliver her.
To be honest I knew what I wanted instantly. A safely delivered baby as soon as possible with as little possible stress for both of us. C-section it was.
I couldn't see much in the theatre but the blue cloth separating my head from the rest of my body and J's face. Theatre lights are reflective so I was doing all I could not to look in them and see what was happening to my numb body.
I can't remember the pulling or tugging, I can remember a cry and one spindlly limb when she was shown to J and we finally knew she was a she. I said L's name and then it gets foggy again.
I can remember hearing my heart beat on the monitor and J being told to bring L to be checked. I felt sick and dozy.
Some time later I was in recovery. Alone with my baby in an incubator. Too far away for me to touch. Just staring at her. I wasn't allowed to hold her till my heart rate increased.
Eventually she was in my arms. This little stranger who I was convinced would be a boy. It felt surreal. Like it had happened to some one else. Luckily she looked like me so I knew she must be mine.
We were at the start of something. For some reason L had made it as difficult as possible to arrive in the way we had thought she would. She was defiant to the end even proving mummy wrong with her gender.
Mummy did however get the weight spot on. 8lb on the cute button, just like her 20 week scan, nose. 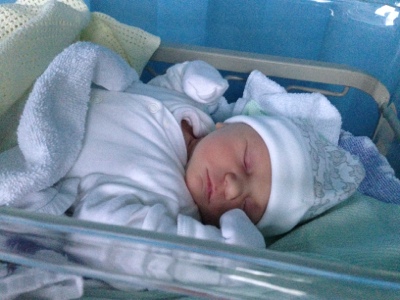 The rest of this story is for another blog post ...